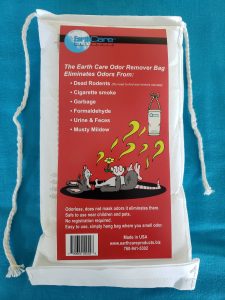 Used by Pest Control Professionals to remove dead animal smell, urine and feces odors associated with infestations.   Earth Care Bags do not have to come into contact with dead rodent or odor causing agent and works even without dead animal removal. Bags are easy to use and last an average of 3-4 months in use and contain no chemicals, toxins or fragrances. Simply place the bag near the odor and in 24 hours the odor will be gone. Earth Care does not mask odors it removes them. Its contents are bio-degradable, non-flammable, non-toxic, safe around children, pets, & mother earth.  Our products do not require registration.

Click here to learn how to remove dead rodent odors.

Earth Care’s natural odor eliminator bag can take from one hour to several days to work, but it is very effective since it removes dead rodent odors versus masking them. It is simple to use and cost effective.  Be sure to use a minimum of 3 bags to get rid of dead animal odors!

Granules are available in bucket size, 14 oz size and 28 oz size.  All of the canisters and the bucket have the same granules inside.  The canisters are labeled for marketing purposes for different uses. 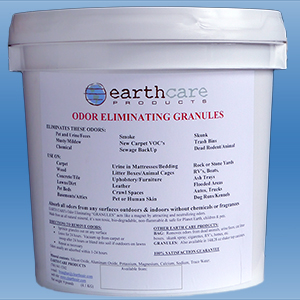 Clear The Air does not have to come into contact with the odor producer; it will pull the odors from the entire area or room.

Clear The Air draws in odors like a powerful magnet. The odors are absorbed, and neutralized without any fragrances.

Clear The Air does not cover up odors; it literally “clears the air” leaving the air fresh and clean.

Clear The Air is made from an all natural mineral, is non toxic and biodegradable and safe for Planet Earth. It is also safe around children and pets.

How to remove odors from carpet:  Sprinkle granules on carpets, brush in.  Leave a window open for some air circulation.  Leave down 24-48 hours and vacuum up.

How to remove odors from lawn, dirt or garden:  Sprinkle granules outdoor where dogs frequent or odor is coming from.  Granules can be left down, they will not harm vegetation.  They act as a time released nitrogen additive. 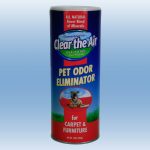 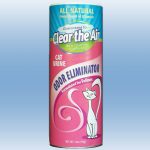 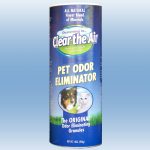 The canisters are 14 oz and cover approximately 100 square feet or 9 square meters.

The Red Carpet/ Furniture and the Blue Pet Odor Eliminator are available in 14 oz and 28 oz sizes.