We have updated our package we hope you like the new look!

Directions to Remove Fluids
Sprinkle Fluid Dry to cover liquid.
Work back and forth with stiff brush.
Once liquid is absorbed sweep up and discard.
To remove stain add more fresh Fluid Dry and grind granules into stain
with your foot.
Repeat as necessary.
Fluid Dry can be left down 1-24 hours (or indefinitely) and will continue to
pull up stain.

How long does the Earth Care Odor Remover Bag Last?

How long will the Earth Care Odor Remover Bag last?
Typically the bag will last 3 months after it is removed from the plastic.  (It will last indefinitely in the plastic.)
It does depend on the types of odors it is being used on.
For example, for a dead rodent odor it will typically last 3 months, so the bag will typically outlast the stink from the carcass.
If it is being used for strong cigarette odor it may only last a few days or weeks.

What do you mean the bag is “full”?
Think of the bag as a sponge.  Odor is drawn into the bag and the Earth Care Mineral inside absorbs the odor.  The molecular structure of Earth Care consists of billions of microscopic pores, which gives it a large surface area (exceeding the size of a football field). This enables Earth Care to absorb phenomenal amounts of odors.  Once “full” it becomes saturated and can no longer absorb odors.

Providing add on services can be significant in both retaining customers and gaining new ones. Some things to consider before offering an add on service:

Earth Care Odor Eliminators make it easy for you to add Odor Control as an add on service. Here are some suggestions:

Most of these solutions offer the opportunity for you to provide an ongoing service which your customer will appreciate and will create addition cash flow to you.

For more information about how to add odor control to your arsenal of services please contact me.  Bill    BVaughan@cleartheair.com

How to Remove Odors After Floods

Hurricane and tornado victims are hit with many emergencies and challenges in rebuilding their homes and communities.

After their immediate needs are met many will be faced with horrendous lingering odors.  In addition to the pest and wildlife issues, you can help them get relief from those odors.

To eliminate musty mildew odors simply hang bags throughout area with odors.  Hang one bag per every 100-300 square feet.  Odor will be completely gone or greatly reduced in  1-4 days.

Simple, cost effective, long lasting satisfaction for your customers with financial benefits for your company.

If you need help with a specific odor problem contact me.

How to Remove Dumpster and Trash Odors

Add On Service:  Odor Control is a perfect add on service for your commercial accounts.  Dumpster rooms are frequently located in close proximity to stores or restaurants and the foul odors can filter into the store or business.  When you are visiting your customer for pest control, simply add or replace the appropriate odor remover products.  This provides a great service for your customer and additional income for you.

To learn more and see a video on how to manage odor in dumpster rooms click here.

You can also sell the bags to your residential customers.  If they have a stinky garage because of stinky trash cans all they have to do is hang a bag in their trash can. 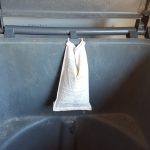 This is a small but very important segment of odor control.  Anions (negatively charged particles) have the ability to attract ions (positively charged particles).  Odor molecules are either ions or ride on ions so there is a natural positive to negative attraction that occurs.  Odor molecules cling to the surface of the anion until an ion exchange takes place which results in the odor molecule giving up an atom of oxygen or nitrogen.  This results in a total elimination of the odor.

Pros:  Not required to come in contact with the odor source in order to work.   Odor free.  Anions last a long time (months).
Cons: Do not work instantly, may take one to 48 hours to work.
Examples:  Earth Care Odor Remover Bags.

This covers the largest and most popular segments of odor control products on the market.  Many of these products work well to rid odors.  They work by providing enzymes, bacteria or some means of biodegradation applied to an odor source to consume odor causing agents.  They come in liquids or sprays.  Some require mixing a concentrated solution, some come in an aerosol can and can be sprayed directly.  Apply directly to various odor sources to remove odors such as an area where a dead carcass had been, urine areas, skunk spray areas, etc.

Pros:  Some work very fast to rid an odor.  Enzyme class products can be very effective in absorbing odors.
Cons:  Must come in direct contact with source in order to work.  Does not last long in use.  If airborne odors are eliminated and the source is not dealt with odors reappear creating non revenue call backs.  May require frequent spraying over a period of about two or more weeks to be effective.
Examples:  Bac-Azap, Nilodor, Odor Pro

These products use a pleasant fragrance to cover up or over power a foul odor.  These are typically used in bathrooms because they are fast and can have a pleasant smell.

Pros:  Work immediately to provide a more pleasant aroma.  If the fragrance outlast the foul odor they are very effective.
Cons:  Do not rid odors, they simply cover them up.  Can be annoying to people with fragrance or chemical sensitivities.  Not long lasting unless a periodic spraying occurs.
Examples:  Purge dual odor eliminator, Aire-mate, T.O.C., Time Mist

Pros: Can be effective on certain odors.
Cons: Does not have a broad range of odor control.  No personnel can be present when running.  Has health hazards associated with equipment.  Can cause damage to carpeting, drapes and paint.
Examples: See manufactures in California Air Resources Board study http://www.arb.ca.gov/newsrel/nr053106.htm for approved equipment.

While other types of odor control are available such as Oxidizers they were not mentioned due to the narrow band of odor elimination, the toxic nature of such solutions and the limited use to the PMP.  Air Purifiers equipped with HEPA filters are also available which require capital expenditure.  Some do a good job which are used in the flood restoration business; again consult the California Air Resources Board study for a recommended list of equipment. 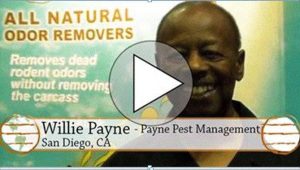